It is a difficult task to attempt to communicate in words the universal matrix that is Papaji, the dispenser of grace.
To be in direct contact with his presence stopped the mind and transformed it into infinite bliss. For anyone who went to see him, he instantly became an object of adoration that radiated its own light and revealed itself in ecstatic awareness.

Papaji is grace in action.
Free of any identification, he could assume any role: master, father, friend, and spouse.
An extraordinarily faithful lover of his free and blissful nature, he ceaselessly honored it in the company of silence.

There was one particular advice that Papaji always repeated: “Be quiet”.
With this magic formula, he showered seekers with blessings, offering them the infallible remedy for the illness of becoming.
It was the end of any attempt to go on in the illusion. “Be quiet” was like a chameleon that continuously changed color, transforming itself into a thousand different meanings: remain in silence, be, shut up, stop, pull the plug, dissolve yourself, center yourself, abandon yourself, let go, look, listen, open up… and many more.
It was impossible to escape the arrow that reduces the illusory “I” to dust.
There is nowhere to run, nowhere to hide anymore.
Papaji’s “be quiet” is an order that goes straight to the heart. The heart has no choice but to obey because it is the Self itself that is pronouncing the order, and the heart knows it and awakens in the recognition of itself in the ocean of infinite awareness.

One day when I was in his room and my mind was racing, Papaji suddenly said to me: ”Neeraja, turn it off!” Did he mean the air conditioner or my mind?
My body automatically bent down toward the switch and automatically rose up again, but on rising up my mind had disappeared. I felt the echo of the command like a magnetic force that transported my awareness far away, and yet so close, to a place that was calm and silent like an immense ocean.
I sank into silence, and the sense of “I” receded into that sea of awareness like a wave recedes. There was nothing external anymore, no more duality. All that was left was conscious, blissful presence. I felt like I had woken up from a dream, and the dreamer discovered that she was absolute essence.
For whole days I couldn’t manage to articulate a single thought: Papaji had pushed me out of the world of thought and made me find myself again in the Infinite Now.
His eyes were so vibrant that the gaze that emanated from them was irresistible. The effect was lethal. The force that radiated from him didn’t speak to me, but to the force inside me that is the same in all of us, that unites all of us. And just a single look is all it takes to remove every doubt in a sincere seeker.

Papaji was like a king who is indifferent to all, and with his smile he filled our hearts with divine nectar.
He carried our minds into peace and love, and stopped the flow of time into eternity.

Every instant in his presence was like a celebration in paradise. The angels and God himself were present.
To be in his company made us become children. Sitting in his armchair, his face was relaxed, round, and golden, his eyes slightly almond shaped and reminiscent of ancient Zen masters. His lips were full and his sweet voice hypnotized the heart. Like children we were captivated by his stories. Every word echoed inside of us like a koan.

Upon returning from India shortly after the cremation ceremony of Papaji, his mahasamadhi, I had a dream:
Papaji was lying down with his eyes closed; he was dead. Then, slowly, he opened his eyes, rose up, and was very sweet to me. He embraced me and looked me in the eyes. I said to him: “But Papaji, what is it that we just cremated?” “Poonja”, he responded. I was overjoyed that Papaji was not dead. There were other people, my friends, and I called them. They came reluctantly, they were sad because Papaji was dead. I called them to make them see that Papaji was not dead, he was alive, and we all prostrated at his feet.
Poonja is dead, Papaji is alive!!!

I had the amazing fortune to meet Papaji, and even more so to live side by side with him in his house, witnessing first hand his daily life in the last years of his marvelous earthly form. In the house of light presence reigned in his form, which was truth.
He lavished everyone who came to seek refuge in his immense heart with the sweet fruit of grace in abundance.

When he moved among people, I saw the impact of his blissful nature shining resplendent in the ecstatic smiles of those touched by his grace.

By showing us the immortal flame he dissipated every idea we had formed. He led us to develop discrimination, revealing to us that which is undifferentiated within differences.
What a divine game his existence was! He taught us not to hold on to the thoughts that “I am the body” and “the body is mine” and to discover that the entire universe is a mental construct. Only the Self is free and eternal.

To be in the company of a master of the caliber of Papaji, to be able to experience in every instant his ordinariness, simplicity, and naturalness, his infinite joy and love, his wonder and beauty, infused through and through with a constant and profound peace…
How can I express the immense gratitude that I feel?
May his songs live in all who welcome him into their hearts, and may they be inundated with blessings. 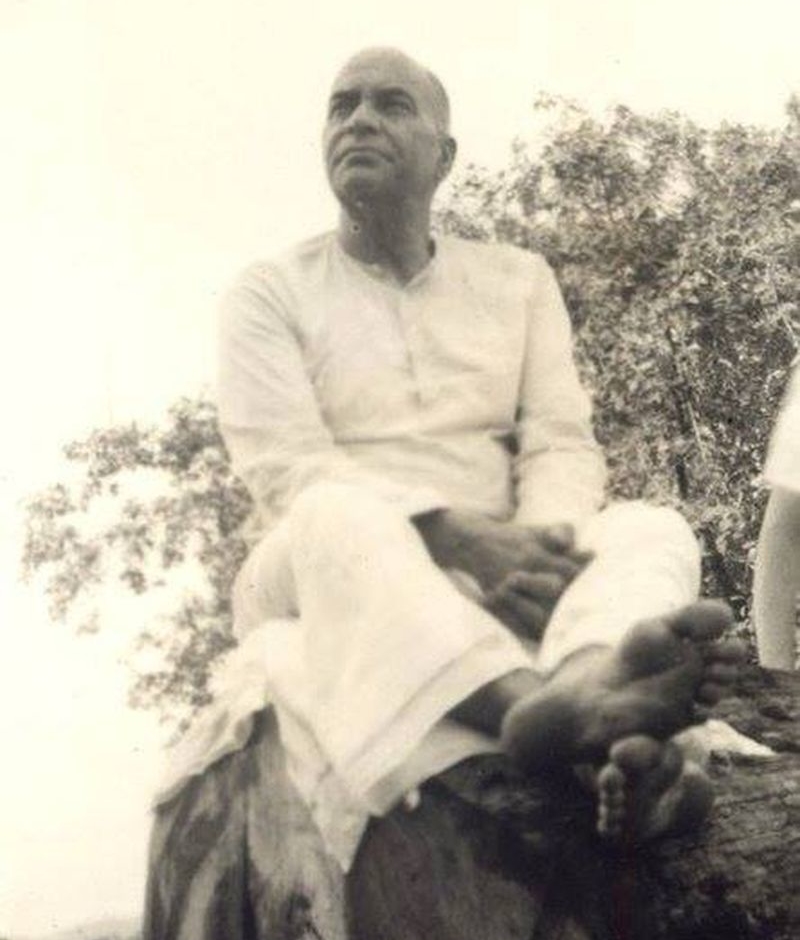 Ubli South of India, in the 60s 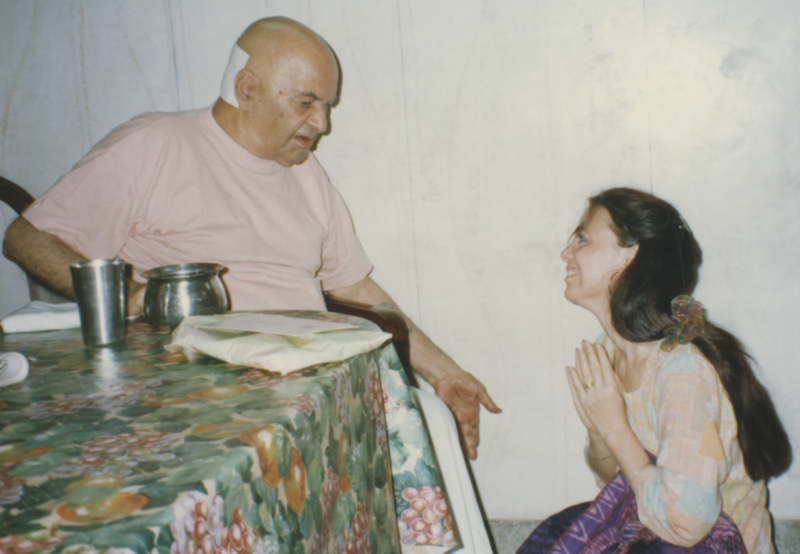 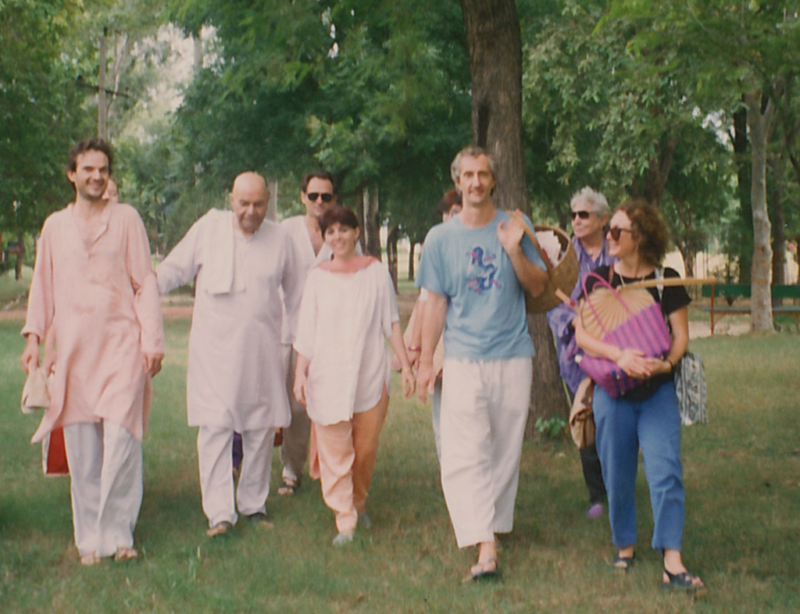 from left to right: Gopal, Papaji, Neeraja, David Godman and others 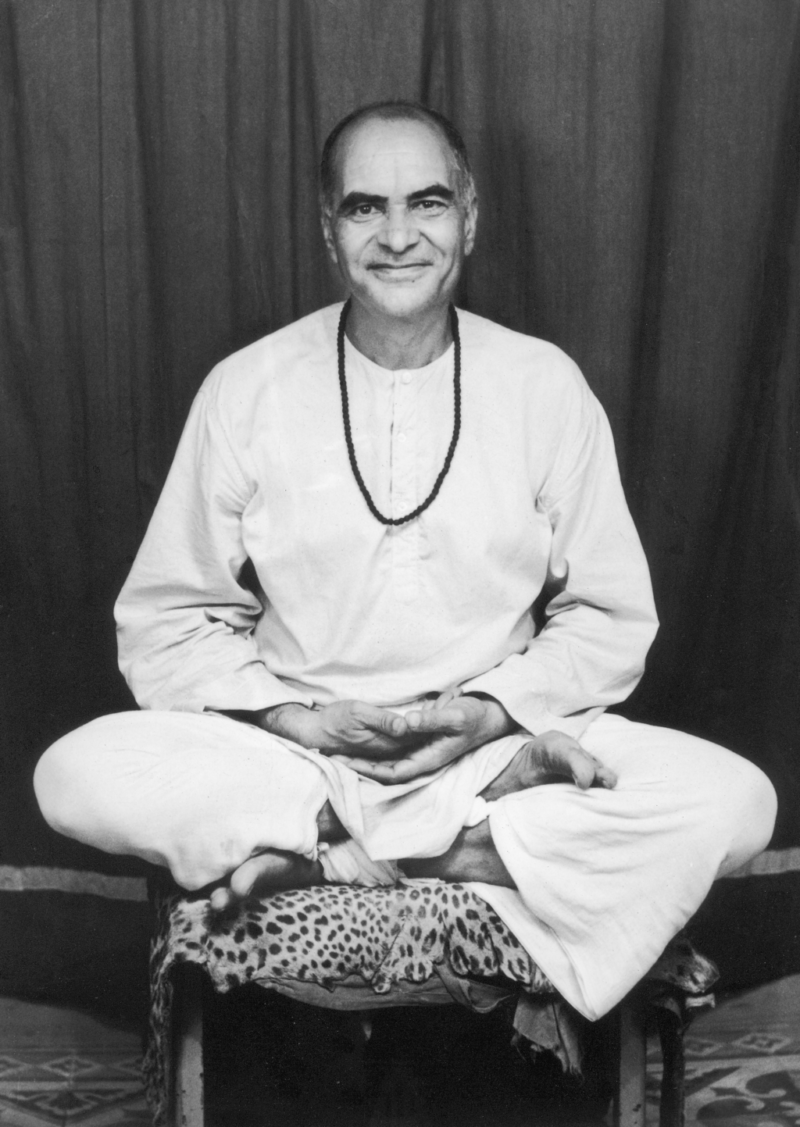 Hardware, in the 70s 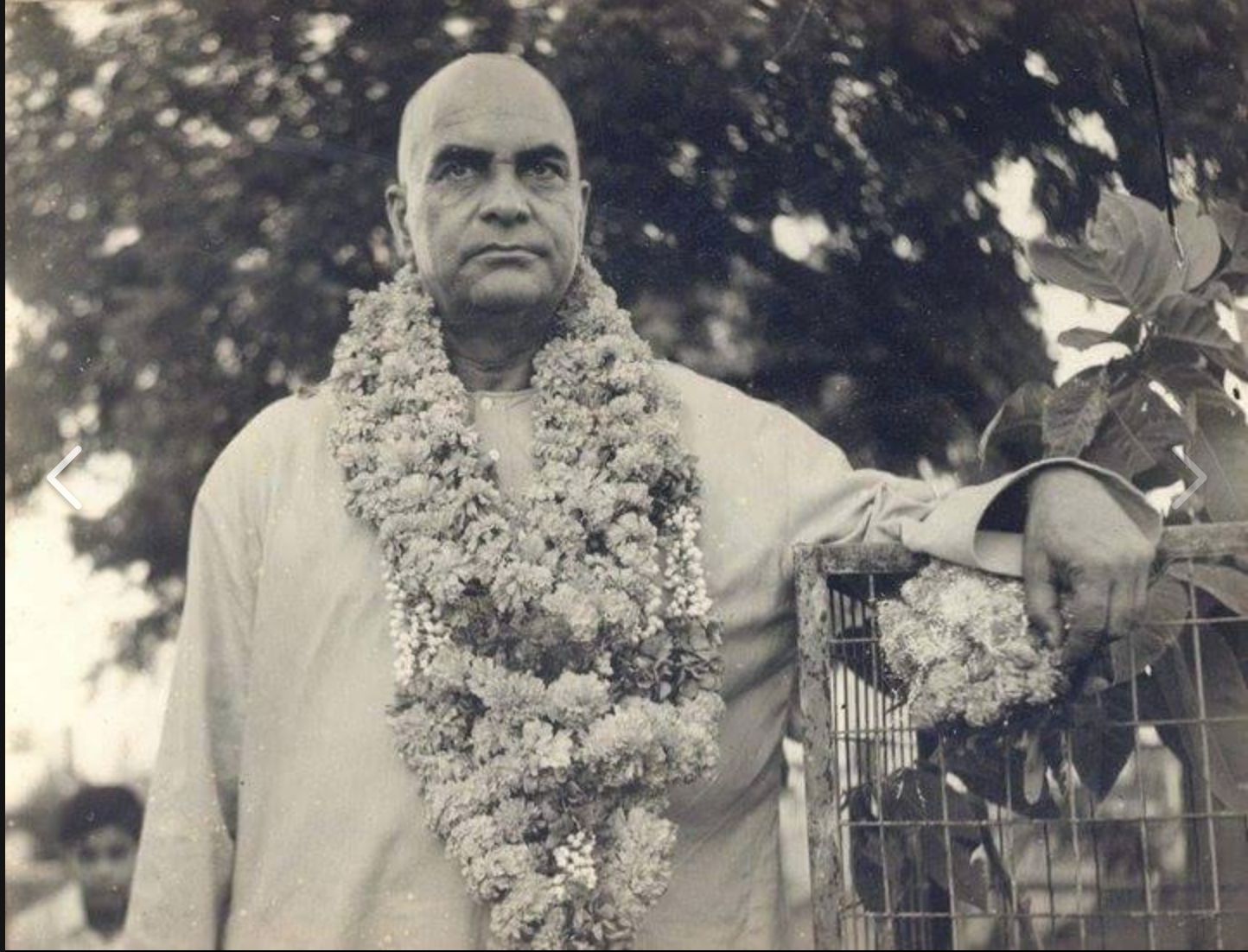 To be bound takes effort, to be free takes no effort.
Do not think and do not make effort because this only obscures That and will never reveal That. 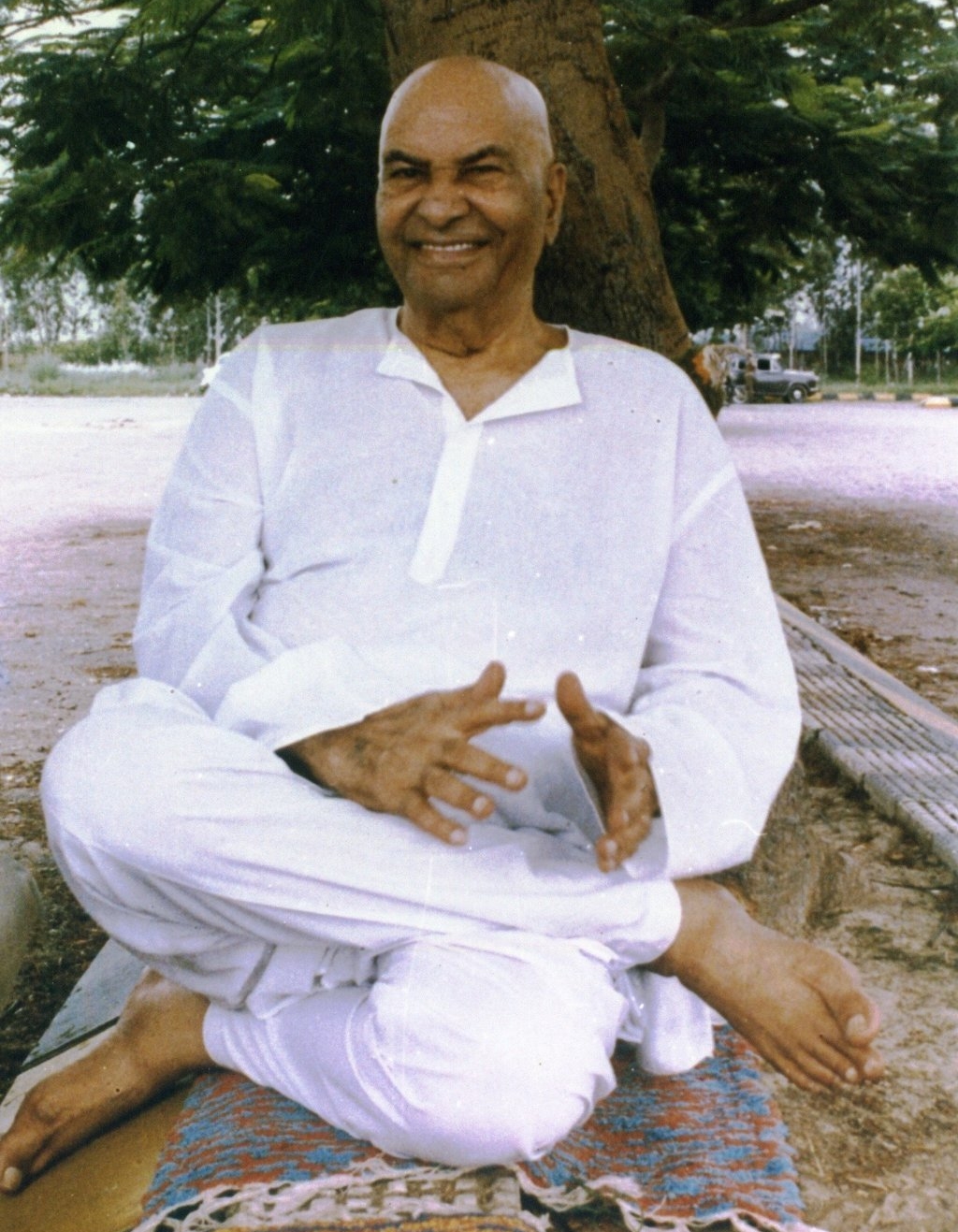 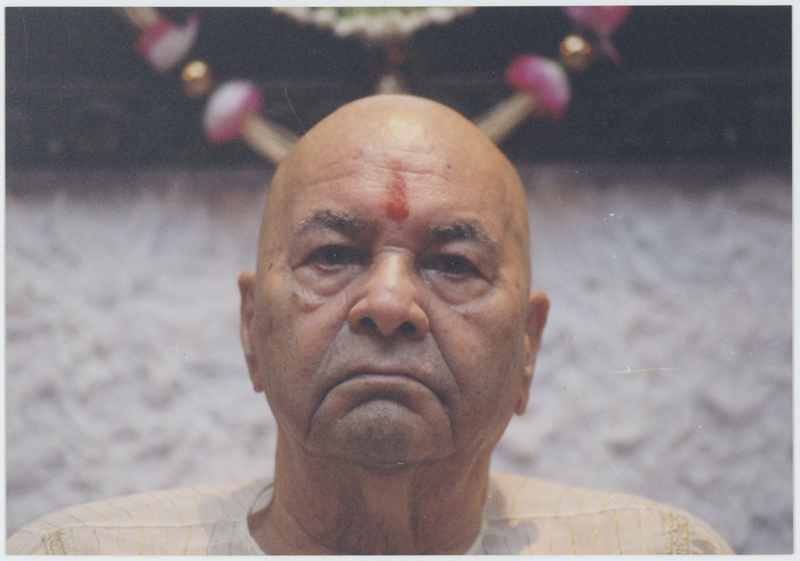 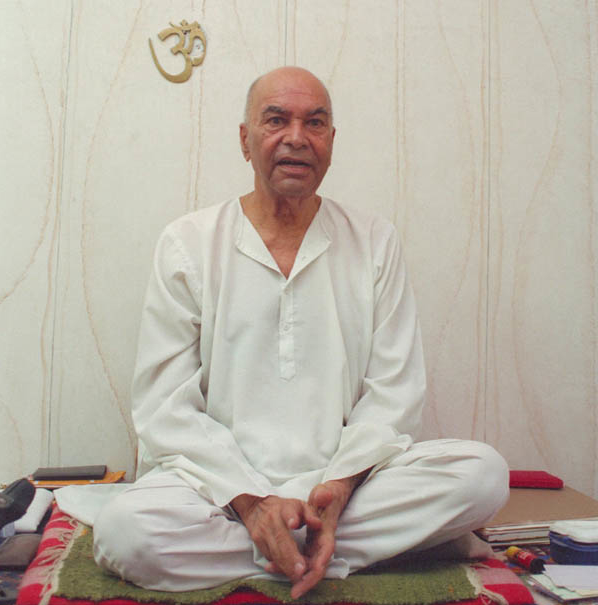 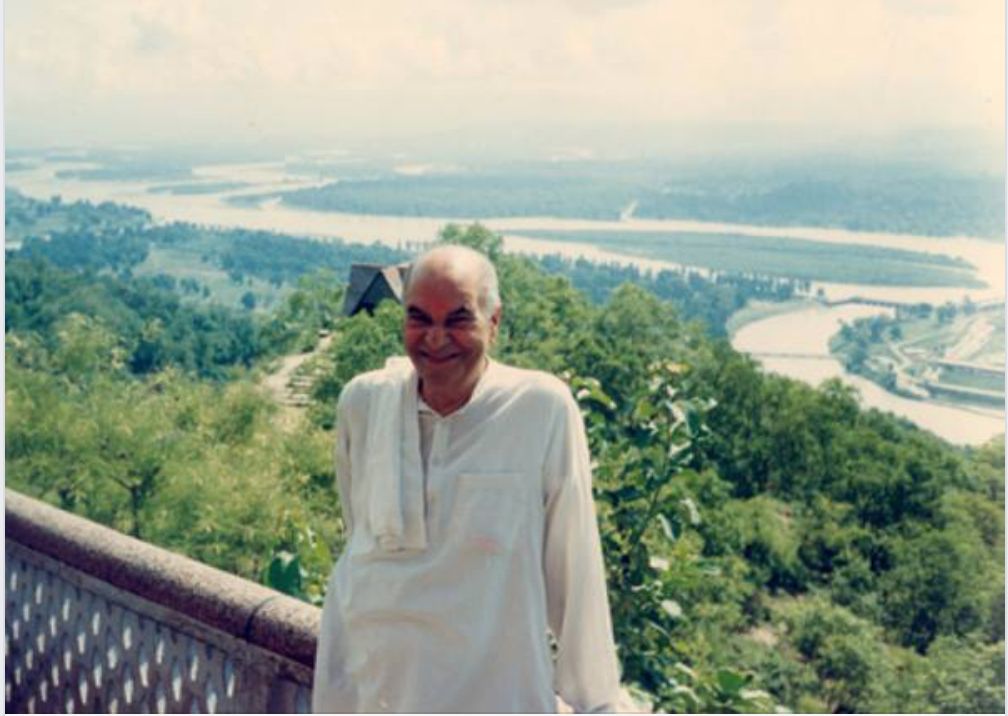 H.W.L. Poonjaji, affectionately called Papaji by his devotees, was born in Punjab (now Pakistan) in 1910. His father, Parmanand, was a station master and his mother, Yamuna Devi, was the sister of one of India’s most famous and revered saints, Swami Rama Tirtha. His mother used to organize gatherings in their home to sing the name of the Lord together with local women, and his father constantly repeated the sacred mantra “Jai Sitaram”.

At the age of eight, Papaji had a spiritual awakening that transformed him from a human child into a divine child. From that moment his life was guided by the light that emanated within him and that he poured into his love for Krishna, his great and eternal companion.
His ecstatic devotion was so intense that he was able to have constant visions of Krishna and play with him, but in the moments when the visions were absent his heart languished in nostalgia and desperately sought to resume contact.

His search for God brought him into the presence of the great Sri Ramana Maharshi, who asked him this question: “Have you seen Krishna?” Papaji answered: “Yes, yes, I’ve seen him”
Ramana continued: “And do you still see him now?” Papaji answered: “No, now I don’t see him!” So Ramana said to him: “What comes and goes is not real. Find out who the seer is”.
These words were the spark that ignited his heart and made it shine forever with the same light that radiated from his beloved Master. That moment was followed by years of transformation in which the light illuminated everything that came into contact with him. His search was over. From then on each day shone with greater power, inundating with blessings the fortunate ones who entered into direct contact with him.

Soon, a large group of devotees gathered around his grace in action.
Papaji was like a leaf tossed by the wind: immobile inwardly, outwardly he landed wherever the wind of his grace carried him. He left India and traveled the world over, wherever groups of devotees eagerly awaited to be ignited by the power of his sacred fire. His teaching fostered the direct experience of reality, taking the time to meet with each seeker in person. His grace had the capacity to stop the mind, instantly transforming it into its Real Blissful Essence. The fortunate ones came from every race, color, religion, age group, and social class.
When he returned to India, he spent much of his time on the banks of the sacred Ganga, the river so dear to his heart.

In 1990, Papaji returned to Lucknow, a city in the north of India where he had lived in his youth, and remained there for seven years until the end of his earthly existence.
Hundreds of devotees from all over the world participated in his precious daily satsangs.
When he left his body in September 1997, his power exploded and is now stronger than ever all over the world.

In my diary I recorded these words that Papaji said to me:
“Freedom is freedom from worries. Once you realize that you cannot influence results, don’t give importance to your desires and fears. Let them come and go. Don’t feed them with your interest and our attention”.

“Dreams appear to be without a beginning, but in reality they take place only in the present. From moment to moment you renew them. Once you understand that you are dreaming, you wake up. But you don’t see it because you want the dream to continue. The day will come when you will long for the end of the dream with all your heart and mind, and you will be willing to pay any price. The price will be detachment, the loss of interest in the dream itself”.

“When you sleep and dream you are in Rome, your body does not move from Lucknow. The same thing happens in the waking state: your mind believes that you are going somewhere, but the truth is that you are always here”.